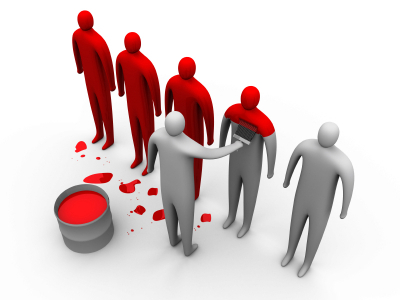 Do you think a person’s group influence his / her attitudes and behaviours? Discuss the role of groups in mass communication.

Groups as Instruments of Change:

Because of the power of social influence, groups can sometimes be used as agents or instru­ments of change. Group structure and group dynamics are very much a part of the process at work in organizations such as Alcoholics Anonymous, Weight Watchers, and some groups that help people to stop smoking. Thr principles of group norms and group pres­sure can often be seen at work in these kinds of efforts. Alcoholics Anonymous, for in­stance, has a group norm that permits and encourages people to talk about their problems with alcohol. This is a reversal of the norm in the culture at large, which discourages talk­ing about an individual’s alcohol problem and almost makes such discussion a taboo. AA members also share other norms, such as the willingness to be available to talk to another member any time of night or day. Similar forces are at wjrk’in stop-smoking groups, whose members often are encouraged to select a “Quit Day” and publicly announce it to the group. This then generates group pressure for the individual actually to quit on that day and then stick by the decision.

The writings of Alcoholics Anonymous (1967), which describe the 12 steps and the 12 traditions of AA, bring out the importance of the group as part of the process. Bill W., one of the founders of AA, wrote in The A.A. Way of Life:

The moment Twelfth-Step work forms a group, a discovery is made—that most individu­als cannot recover unless there is a group. Realization dawns on each member that he is but a small part of a great whole; that no personal sacrifice is too great for preservation of the Fellowship. He learns that the clamor of desires and ambitions within him must be si­lenced whenever these could damage the group.

It becomes plain that the group must survive or the individual will not. (p. 9)

Bill W.’s belief that the group was more important than the individual was once put to a severe test—he was offered a chance to have his picture on the cover of Time magazine as the cofounder of Alcoholics Anonymous. He thought about it a while and turned it down.

Group dynamics can also be applied to fund drives, such as the United Way or United Fund. DeFleur and Ball-Rokeach (1982, pp. 227-228) have described the way this process often works. First a quota is set for the community as a whole. This quota is sometimes displayed in the middle of town on a big thermometer so that everyone can see it. This quota is in fact somewhat arbitrary, being set by the fund drive organizers, but it begins to take on the appearance of a community norm. This approach is carried further by distrib­uting pledge cards to individuals that indicate the “fair share” that they are supposed to pay for the community to meet the quota. This is a tactic of group pressure, in that the individual is made to feel that he or she will be letting others down if a donation is not made. Personal influence is also brought into the process. Often the pledge <?Srds are dis­tributed and collected by an important coworker, such as the boss’s secretary. Some of these fund drives also use door-to-door collections, in which the person doing the collect­ing is a neighbor or a person living on the same block—an effective use of social influence.

A kind of social influence within the primary group of the family appears to have been taking place lately in the revival of the ecology movement. Youngsters have been learning about threats to the environment from school, television, and rock stars, and have been exerting pressure on their parents to act in more ecologically sound ways. Often the chil­dren are more aware of environmental issues than their parents. Cases have been reported of children urging parents to avoid purchasing aerosol sprays; to recycle cans, bottles, plas­tic, and paper; and to use waxed paper instead of plastic sandwich bags (Manning, 1990).

The importance of group influence has been well understood by many people involved in mass communication. Father Coughlin, the “radio priest” who was such a skillful user of propaganda, would ask his audience to listen to him in groups. He also began his broad­casts with music and told audience members to take that time to call a friend and ask the person to listen to the program.

Many advertisements and commercials attempt to incorporate some form of group influ­ence. For instance, a television commercial for a dye for gray hair makes the statement, “I bet a lot of your friends are using it and you don’t even know it.” Basically, this type of commercial is using the old propaganda device of band wagon.

Another promising idea is to use mass communication channels to attempt to stimulate interpersonal discussion. For instance, one California grocery chain’s campaign theme was “Tell a Friend” (Solomon, 1989, p. 100).

Researchers working in the field of health communication have found an approach based on group influence to be an effective one . One example of this work is the Stanford Heart Disease Prevention Program, a joint effort by Stanford’s Department of Communi­cation and School of Medicine (Maccoby & Farquhar, 1975, 1976). The purposes of the program were to apply communication theory to the development of a health communica­tion campaign and to use evaluation research to measure change due to the campaign. The campaign was intended to change people’s habits relating to the three leading risk factors in heart disease—diet, smoking, and lack of exercise. The researchers picked three Califor­nia towns that were as alike as possible to test their approaches. The first was given an eight-month media campaign involving local TV and radio spots, a newspaper tabloid, billboards, and direct mail. The second town was given the same media campaign but selected groups of high-risk people were also given intensive group instruction in reducing risks. The third town served as a control group and received no campaign or instruction.

Flay (1987), in a summary of research on mass media programs designed to help people stop smoking, found that television self-help clinics that included social support in the form of group discussion were particularly effective. The studies examined by Flay sug­gested that making written materials available to accompany a television program will dou­ble its effectiveness, and that adding group discussions can triple it. Flay estimates that television self-help clinics are able to help 5-15 percent of participating smokers to quit permanently. Although this may sound like a small effect, if such a clinic were conducted once nationally, it could help between 2.5 million and 7.5 million of the nation’s 50 million smokers to quit. It has been suggested that the same kind of television self-help clinic might be useful in getting people to modify other health-related behaviors such as alcohol and drug abuse, or sexual practices increasing the risk of AIDS and other sexually trans­mitted diseases (McAlister. Ramirez, Galavotti, & Gallion, 1989).

In politics, the. mass media campaigns are often supplemented by various types of inter­personal communication, including door-to-door visits, telephone calls, and neighborhood coffees.  *

Reardon and Rogers (1988) have suggested that the common division in academic circles between mass communication and interpersonal communication is a false dichotomy, and that the strongest possible communication theory wili be developed only when researchers integrate the two.

Groups have impact on mass communication in a number of ways:

–       Groups serve to anchor attitudes and make them hard to change. This was suggested by the Cooper and Jahoda study of the Mr. Biggott cartoons and also documented in the area of politics by the election studies of Lazarsfeld and his associates.

–       Knowledge of the groups that a person belongs to or identifies with can often help us predict the person’s behavior. This is particularly true in the area of political preferences, where knowledge of five or six broad group categorizations about a person will often give a high degree of accuracy in predicting an election vote.

Sometimes ways can be found to obtain some of the advantages of interpersonal com­munication through mass communication. Television programs in which a candidate an­swers questions telephoned in by viewers would be an example. So would presidential “citizens press conferences,” in which the president answered questions phoned in by cit­izens during a national radio broadcast. Some of the same advantages can be obtained by having a panel of typical citizens in the studio to question a political candidate in a kind of “town meeting” format.