Communication was central to the expansion and consolidation of modern European empires, the largest and the most powerful being the British Empire, which at its height, 1880-1914, dominated a quarter of humanity. The fortunes of Reuters, the most famous international news agency, can be seen to run in parallel with the growth of the British Empire. The Era of News Agencies The expansion of trade and investment during the nineteenth century had led to a huge growth in the demand for news and contributed to the commercialization of news and information services. Reuters astutely exploited this demand, helped by the new communication technologies, especially the telegraph. For British and other European investors Reuters telegrams were essential reading for the latest news from various corners of the British Empire. By 1861 these were being published from more than a hundred datelines, including from the major colonies – India, Australia, New Zealand, […] The newspaper industry played a significant role in the development of international telegraph networks, to be able to exploit the rapid increase in demand for news, especially the financial information required to conduct international commerce. The establishment of the news agency was the most important development in the newspaper industry of the nineteenth century, altering the process of news dissemination, nationally and internationally. The increasing demand among business clients for commercial information – on businesses, stocks, currencies, commodities, harvests – ensured that news agencies grew in power and reach. The French Havas Agency (ancestor of AFP) was founded in 1835, the German agency Wolff in 1849 and the British Reuters in 1851. The US agency, Associated Press (AP) was established in 1848, but only the three European agencies began as international ones; not until the turn of the century did an American agency move in this direction. From the start, […] 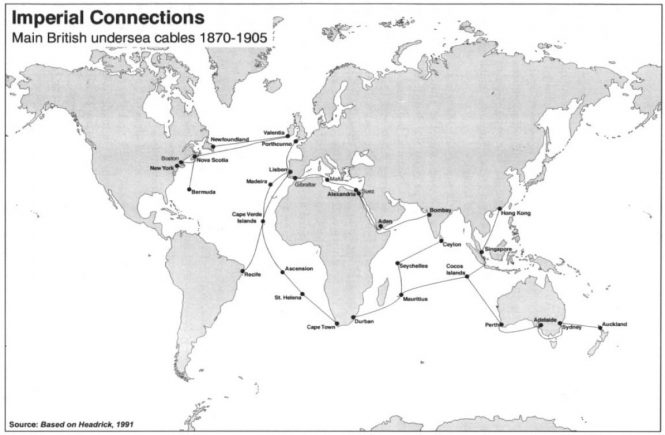 The second half of the nineteenth century saw an expanding system of imperial communications made possible by the electric telegraph. Invented by Samuel Morse in 1837, the telegraph enabled the rapid transmission of information, as well as ensuring secrecy and code protection. The business community was first to make use of this new technology. The speed and reliability of telegraphy were seen to offer opportunities for profit and international expansion (Headrick, 1991). The rapid development of the telegraph was a crucial feature in the unification of the British Empire. With the first commercial telegraph link set up in Britain in 1838, by 1851 a public telegraph service, including a telegraphic money order system, had been introduced. By the end of the century, as a result of the cable connections, the telegraph allowed the Colonial Office and the India Office to communicate directly with the Empire within minutes when, previously, it […]

The study of contemporary international communication can be illuminated
by an understanding of the elements of continuity and change in its development.
The nexus of economic, military and political power has always
depended on efficient systems of communication, from flags, beacon fires
and runners, to ships and telegraph wires, and now satellites. The evolution
of telegraphic communication and empire in the nineteenth century exemplifies
these interrelationships, which continued throughout the twentieth
century, even after the end of empire. During the two World Wars and the
Cold War, the power and significance of the new media – radio and then television
– for international communication were demonstrated by their use
for international propaganda as well as recognizing their potential for socioeconomic
development. Virtue ethics is the next approach that we will cover. This brand of ethics does not aim at establishing codifiable universal principles that would amount to a decision procedure for determining what the right action would be in any given case, but rather focuses on the role of virtues and the character of a person. It has its origins in ancient Greek philosophy, in the thought of Socrates, Plato and Aristotle. A key question in virtue ethics is how to mould individual character based on models of virtue, or to put it more simply: How can we become a ‘good person’? (Athanassoulis, n.d.; Plaisance, 2014: 24). One should strive to develop a ‘virtuous character’. This entails a much broader perspective than the other two approaches, which focus on specific ethical dilemmas that need to be solved. A virtue may be considered a character trait, but it is more than this: […] 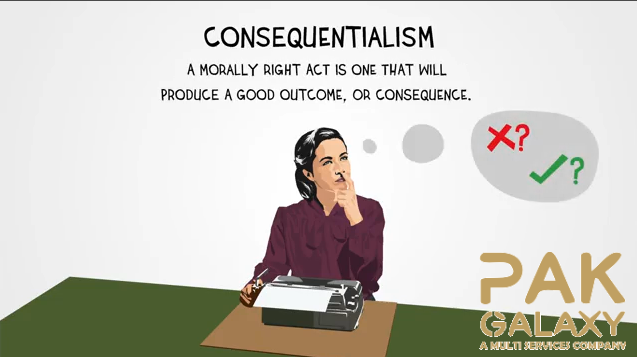 One of the principal ethical philosophies is consequentialism, a class of normative ethical theories. This theory can be seen as one of the leading moral perspectives in Western society, and it has dominated media ethics during the last century. As its name suggests, consequentialism holds that the consequences of one’s conduct are the ultimate basis for any judgment about the rightness or wrongness of that conduct. Thus, from a consequentialist standpoint, a morally right act is one that will produce a good outcome, or consequence. One of the philosophies within consequentialism – besides several classic variations – is utilitarianism. Utilitarianism is a theory in normative ethics which holds that the best moral action is the one that maximizes utility. Utility in this context is happiness, or pleasure. In short, this is about ‘the greatest good for the greatest number’. By asking what will bring the greatest amount of happiness to […] When discussing communication ethics, it is important to understand exactly what is meant by ‘ethics’. Sometimes, people confuse ethics with behaving in accordance with social conventions, religious beliefs and the law. And, sometimes the terms ethics and morals are used interchangeably, because they clearly are both related to “right” and “wrong” conduct. However, they are not the same thing at all! Ethics refer to rules provided by an external source. They are governed by professional and legal guidelines within a particular time and place. Ethics are all about how we deal with ‘grey areas’. Ethics therefore refer to the value judgments we make on bigger and smaller matters, in communication as well as in other fields. A concrete example of ethics are codes of conduct in workplaces. Lawyers, policemen, and doctors all have to follow an ethical code laid down by their profession, regardless of their own feelings or preferences. […]