Free flow of information, After the Second World War and the establishment of a bi-polar world of free market capitalism and state socialism, theories of international communication became part of the new Cold War discourse. For the supporters of capitalism, the primary function of international communication was to promote democracy, freedom of expression and markets, while the Marxists argued for greater state regulation on communication and media outlets. The concept of the ‘free flow of information’ reflected Western, and specifically US, antipathy to state regulation and censorship of the media and its use for propaganda by its communist opponents. The ‘free flow’ doctrine was essentially a part of the liberal, free market discourse that championed the rights of media proprietors to sell wherever and whatever they wished. As most of the world’s media resources and media-related capital, then as now, were concentrated in the West, it was the media proprietors […] Theories have their own history and reflect the concerns of the time in which they were developed. This chapter examines some that offer ways of approaching the subject of international communication and assesses how useful their explanations are in terms of an understanding of the processes involved. This is by no means a comprehensive account of theories of communication (see McQuail, 1994; Mattelart and Mattelart, 1998), nor does it set out an all-embracing theorization of the subject, but looks at the key theories and their proponents, which together with the preceding chapter on the history of international communication, should help to contextualize the analysis of contemporary global communication systems in subsequent chapters. It is not surprising that theories of communication began to emerge in parallel with the rapid social and economic changes of the Industrial Revolution in Europe, reflecting the significance of the role of communications in the growth of […]

If the East-West ideological battle characterized the Cold War years of international communication, the fall of the Berlin Wall in 1989 and the breakup of the Soviet Union two years later, transformed the landscape of international politics, profoundly influencing global information and communication. Television played an important role during the 1989 revolutions in Eastern Europe. (Ash, 1990), helping to bring the East-West ideological division of Europe to a close. The transition to capitalism was largely peaceful, except in Romania, where at least some of the violence was simulated. The 1989 Timisoara massacre in Romania was ostensibly staged for the world’s TV cameras, in what the French sociologist Jean Baudrillard called, ‘a hijacking of fantasies, affects and the credulity of hundreds of millions of people by means of television’ (1994: 69). The August 1991 coup in Moscow, which led to the break-up of the Soviet Union, was called ‘the first true […] 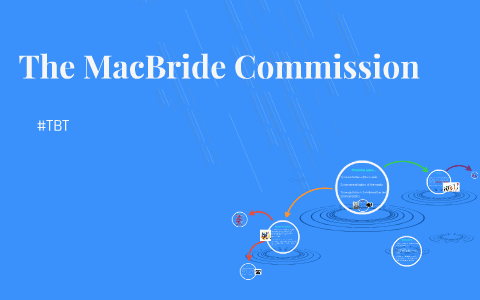 The International Commission for the Study of Communication Problems that was established under the chairmanship of Sean MacBride by UNESCO occupies a prominent place in the debate regarding the establishment of a NWICO. The Commission report, commonly known as the MacBride Report, gave intellectual justification for evolving a new global communication order. For this reason the NWICO protagonists considered it to be a seminal document. The Commission was created in 1977 as a direct response to Resolution 100 of the 19th General Session of UNESCO held in Nairobi in 1976. The Commission took two years after going through one hundred working papers especially commissioned for it, to bring out one interim and a final report in 1980. The Commission had the following 16 members: Sean MacBride, chairman (Ireland), Elie Abel (USA), Hubert Beuve-Mery (France), Elebe Ma Ekonzo (Zaire), Gabriel Garcia Marquez (Columbia), Mochtar Lubis (Indonesia), Mustapha Masmoudi (Tunisia), Betty Zimmerman […] The demand for a New World Information and Communication Order The international information system, the NWICO protagonists argued, perpetuated and strengthened inequality in development, with serious implications for the countries of the South, which were heavily dependent on the North for both software and hardware in the information sector. It was argued by Third World leaders that through their control of major international information channels, the Western media gave an exploitative and distorted view of their countries to the rest of the world. The existing order, they contended, had, because of its structural logic, created a model of dependence, with negative effects on the polity, economy and society of developing countries. Their demands were articulated by Tunisian Information Minister Mustapha Masmoudi, who was later a member of the MacBride Commission. The chief complaints from the long litany of the Third World demands were as follows: • owing to the socio-technological […] The use of modern technologies for development purposes was pioneered by the Indian Government when in 1975 it launched the Satellite Instructional Television Experiment (SITE). The programme, supported by UNESCO, aimed to use satellite technology to assist development by transmitting daily programmes on health, agriculture and education to rural communities. India’s Department of Atomic Energy negotiated a deal with the US National Aeronautics and Space Administration (NASA) which loaned India one of its satellites, Applications Technology Satellite-6 (ATS-6), for a year to make these broadcasts in exchange for sharing the knowledge from the project. The SITE programmes lasted from 1 August 1975 to 31 July 1976, and the estimated cost to India of the world’s largest techno-social experiment was about $6.6 million. The government chose 2400 villages, selected from 20 districts of some of the poorest regions of six contiguous provinces – Orissa and Bihar in the east, Madhya Pradesh […] For nearly half a century, the Cold War divided the world into hostile East-West blocs. This had significant implications for the development of Third World countries, most of whom wanted to avoid bloc politics and concentrate on the economic emancipation of their populations. The phrase ‘Third World’ itself was a product of the Cold War, said to have been coined by French economic historian Alfred Sauvy in 1952, when the world was divided between the capitalist First World, led by the United States and the communist Second World with its centre in Moscow. The ‘Third World’ was the mass of countries remaining outside these two blocs1 (Brandt Commission, 1981; South Commission, 1990). National liberation movements in Asia, Africa and Latin America had altered the political map of the world. The vast territory occupied in 1945 by European colonial powers extended over 36 million sq. km; by 1960 as a result […]