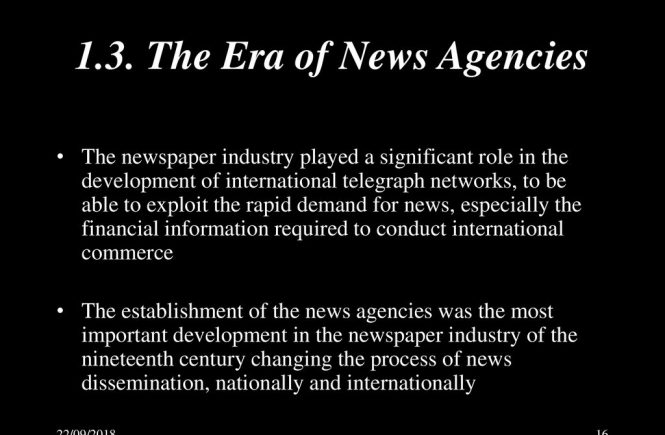 The newspaper industry played a significant role in the development of international telegraph networks, to be able to exploit the rapid increase in demand for news, especially the financial information required to conduct international commerce. The establishment of the news agency was the most important development in the newspaper industry of the nineteenth century, altering the process of news dissemination, nationally and internationally. The increasing demand among business clients for commercial information – on businesses, stocks, currencies, commodities, harvests – ensured that news agencies grew in power and reach.
The French Havas Agency (ancestor of AFP) was founded in 1835, the German agency Wolff in 1849 and the British Reuters in 1851. The US agency, Associated Press (AP) was established in 1848, but only the three European agencies began as international ones; not until the turn of the century did an American agency move in this direction. From the start, Reuters made commercial and financial information its specialty, while Havas was to combine information and advertising. These three European news agencies, Havas, Wolff and Reuters, all of which were subsidized by their respective governments, controlled information markets in Europe and were looking beyond the continent to expand their operations. In 1870 they signed a treaty to divide up the world market between the three of them. The resulting association of agencies (ultimately to include about 30 members), became known variously as the League of Allied Agencies (les Agences Alliees), as the World League of Press Associations, as the National Agencies Alliances, and as the Grand Alliance of Agencies. More commonly, it was referred to simply as the ‘Ring Combination’ (Desmond, 1978). In the view of some it was a ‘cartel’, and its influence on world opinion was used by governments to suit their own purposes (Boyd-Barrett, 1980; Mattelart, 1994).
The basic contract, drawn up in 1870, set ‘reserved territories’ for the three agencies. Each agency made its own separate contracts with national agencies or other subscribers within its own territory. Provision was made for a few ‘shared’ territories, in which two, sometimes all three agencies had equal rights. In practice, Reuters, whose idea it was, tended to dominate the Ring Combination. Its influence was greatest because its reserved territories were larger or of greater news importance than most others. It also had more staff and stringers throughout the world and thus contributed more original news to the pool. British control of cable lines made London itself an unrivalled centre for world news, further enhanced by Britain’s wide ranging commercial, financial and imperial activities (Read, 1992).
In 1890, Wolff, Reuters and Havas signed a new treaty for a further ten years. Havas emerged stronger than ever – it gained South America as an exclusive territory, and also Indo-China. But Havas yielded its position in Egypt, which became exclusive Reuters territory but continued to share Belgium and Central America with Reuters. ‘The major European agencies were based in imperial capitals. Their expansion outside Europe was intimately associated with the territorial colonialism of the late nineteenth century’ (Boyd-Barrett, 1980: 23).
After the First World War, although Wolff ceased to be a world agency, the cartel continued to dominate international news distribution. The first challenge to their monopoly came from AP when it started supplying news to Latin America. With the international news cartel broken by the 1930s, AP and other US agencies such as United Press (UP), founded in 1907, (which later became United Press International (UPI) in 1958 after merger with Hearst’s International News Service), began to encroach on their terrain. AP began to expand internationally, paralleling political changes in Europe with the weakening of the European empires after the First World War.
The Rise of Reuters – The Era of News Agencies