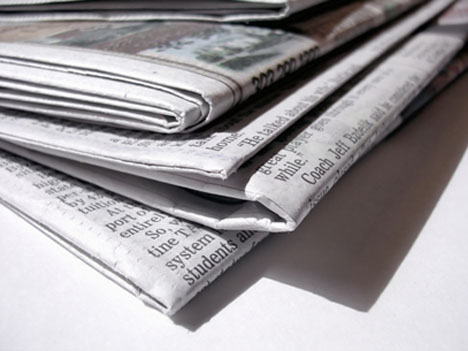 Print media includes those media of communication which are controlled by space rather than time. It can be read at any available time and can be kept for record. Following are the major print media of mass communication.

In the past books was not a mass medium but privilege of the elite class. There were two reasons for that. Firstly, books were not printed but transcribed by hand. Secondly, the low literacy level in the masses limited books exclusively to a small fraction of the society. It was the nineteenth century which saw book as a mass medium.

In the contemporary world, book is one of the most effective mass media. It is the best source of education. However, it should not be talent merely as an educational tool., It is the best and cheapest means of storing and transmitting to others the records, knowledge, literature speculations and entertainment characteristics of the human society. It represents the conscience of time and people gone by, and it speaks to each reader individually. Computer can also be used for storage and retrieval of information. However it has yet to go a long way to replace book for storing and retrieval purposes.

Books provide permanent record. Some books printed several years ago are still in existence. Books, from their beginning, have demonstrated their capacity to bind traditional societies together and to give rise to new and sometimes revolutionary thought patterns.

Books are categorized as:

Newspaper is one of the most important and effective print media of mass communication. It was first published in Germany and later spread its roots to the rest of the world. Its valuable services to the community like information, education, entertainment, persuasion, cultural transmission, record facility etc., have made it an inevitable medium for the contemporary world.

Functions of a Newspaper

A Newspaper provide information to people about various events, issues and occurrences the world-wide. It also interprets and explains matters which will be otherwise difficult to understand for readers.

Besides reflection of public opinion a newspaper helps its readers to build opinion about various national and international issues, events and policies through its editorials and opinion columns.

A Newspaper is a great public educator. It discusses every topic ranging from news to literature; supplies the readers up-to- date information about science about science and technology and also promotes civilization in the society.

A Newspaper also entertains its readers through special

It serves as an agent between seller and buyer. It increases sale of various goods and services through its advertisements. Besides the above mentioned functions, a newspaper also provides a forum to the minorities, serves as a watchdog of the government, and is used as a source for record and background information etc.

Magazine is another important print medium of mass communication. It is the predecessor of the daily newspaper. Especially, the birth of journalism in the Indo-Pak Sub-Continent dates back to the magazine journalism. Hickey Gazette, Jam-e-Jehan Nama, Miratul Akhbar and Dag

Darshan the first English, Urdu, Persian and Bengali languages papers respectively were all weeklies at their debut.

A magazine is published periodically in a bound format, has a double paper cover and usually better quality paper is used. Magazines can be classified in terms of the regular intervals of their publication and appeal- wise. The first category includes Weekly, fortnightly, Monthly, Bimonthly, Quarterly, Annually and Biennially etc., while the latter category include Mass Magazines, class magazines and specialized magazines etc.

Functions of a magazine

With a slight difference a magazine performs almost the same functions as a newspaper does:-

Unlike newspapers a magazine does not provide hard news. However, it satiates its readers thirst for information with in-depth coverage of various stories. These may be about politics, crime, personalities or fashion etc.

Magazine is a comparatively more entertaining print media. Besides other uses it gratifies readers urge for entertainment. It contains features, comics, sports, showbiz, current affairs etc., for its readers.

Some magazine'(mass magazines) have general appeal for readers white others have specialized readers. However, both types are entertaining for their readers.

Like newspapers magazines also have specific editorial policy. They comment on various issues and policies in the light of their own respective editorial policies which on the one hand, guide public opinion and on the other express their own policy.

A magazine provides the means for establishing a credible roster of potential customers for certain kinds of products.

News letters can be an effective low cost way to reach readers. A newsletter provides information in the briefest form. Its readers are selective. Commercial concerns usually use news letters to reach their clients or potential clients in an effective way.

Both pamphlet and a leaflet are effective to convey a message to the target audience. However, these usually have localized influence. They are informative and persuasive rather than entertaining. How you would differentiate between linguistics and non-linguistics communication?