THE INSTITUTE FOR PROPAGANDA ANALYSIS

Should the power of propaganda be used for democratic ends (the Lasswell/Lippmann view), or because propaganda, by its very existence, was antidemocratic, was education the best way to deal with it (the Dewey view)? The disagreement over the proper place of propaganda in a democracy was no theoretical exercise. Social scientists believed the fate of the country, the world in fact, rested on its outcome.

In 1937, the threat of external propaganda was so great that a group of social scientists, journalists, and educators founded the Institute for Propaganda Analysis with the goal of orchestrating a nationwide educational effort to combat its effects. During the four years of its existence, the institute was quite productive, generating numerous pamphlets, books, and articles explaining how propaganda works (read more about propaganda techniques in the box entitled “Applying the Seven Propaganda Techniques”). The institute was successful in developing an antipropaganda curriculum adopted by high schools and adult education programs across the country. It was so successful that it came under attack for undermining the effectiveness of propaganda techniques seen as essential to defending democracy.

In 1941, an opponent and a defender of the institute’s educational efforts faced off in the pages of Public Opinion Quarterly, a journal that devoted considerable attention to propaganda during the 1930s and 1940s. Bruce L. Smith questioned the value of propaganda analysis, that is, education, because he believed it fostered cynicism that could actually lead most students toward authoritarian views. At the time he wrote this article, he headed the U.S. Justice Department’s efforts to censor propaganda and arrest foreign agents who engaged in it. He argued:

Students at first become tremendously interested in the sportive side of launching an attack on “propaganda devices.” . . . After this first excitement, they tend to become morally indignant, at least in most cases, about the sheer quantity of fraud and misleading utterance to which they have been exposed all their lives, especially in paid advertising and in political speeches. At this point they have a tendency to espouse some program or other of violent censorship and even suppression of those who issue “antisocial” propaganda. They demand a Board of Public Opinion Censors, with wide and confiscatory powers. At this level of opposition to free speech many of them remain, even if it is pointed out to them that censorship of anyone who claims to support democracy is in no way compatible with the traditions and program of the American people.

Smith was cynical in his assessment of the ability of ordinary students to learn how to deal with propaganda on a day-to-day basis. Only a few could be expected to be “far-sighted” and able to develop the “intellectual vitality” to “undertake the lifelong burden of preserving free speech.” His argument was that the burden would prove to be so heavy that those who carried it would demand censorship rather than education as the solution to combating propaganda. Smith saw the American social order as inherently, and properly, elitist—a democracy of the few because the many had little ability to participate effectively. Average people must necessarily be governed by a paternalistic elite. But if education wouldn’t work, then what was the alternative? According to Smith (1941, p. 252), “The teacher, therefore, needs to look ahead. To be sure, democracy demands that we constantly and vigorously practice propaganda analysis (education). But we must also look beyond it to the establishment of a ‘science of democracy,’ of which propaganda analysis is but one indispensable part.”

But what was the “science of democracy” and how would it be superior to propaganda analysis’s educational approach? Smith explained:

Students frightened by their recent discovery of the gullibility and irrationality of the great mass of mankind cannot be expected to retain much faith in the value of social control by democratic discussion. To preserve and develop this faith, it is necessary to encourage them to analyze and appraise the potency of such common mechanisms of wishful thinking as regression, rationalization, repression, projection, sadism, and masochism. It is not necessary, however, to clutter up their vocabularies with a great number of terms like these in order to put over the essential points. What is needed is a concise, structuralized picture of individual human motives, comparable with the structuralized picture of society already drawn. (Smith, 1941, p. 258)

What Smith was proposing was a form of “democratic propaganda” that could be used to combat the cynicism generated by propaganda analysis. Students who suddenly realized just how gullible they and others were and how systematically they were being manipulated had to be reassured that there were elite experts who understood this phenomenon and had developed concepts to deal with it. But since these concepts were too hard and too complicated to explain, they needed to be simplified into a “concise, structuralized picture” that didn’t “clutter up the vocabularies with a great number of terms.” In other words, they needed to be subjected to “good” propaganda; in Bernays’s terms, they needed to have their consent engineered.

Clyde Miller, an education professor at Columbia University and secretary for the Institute for Propaganda Analysis, found Smith’s call for good or democratic propaganda unpersuasive:

In propaganda analysis the Institute has been emphasizing an objective, scientific approach to controversial issues and, as an integral part of that approach, has been trying to build—to use Mr. Smith’s phrase—“a vigorous faith in the values and ultimate triumph of democratic practice.” Mr. Smith states that many teachers have been making early attempts to build “propaganda resistance” among their students. True. It is not propaganda resistance, however valuable as that may be at times in dealing with antidemocratic propagandas, which is stressed in the educational program of the Institute for Propaganda Analysis; it is understanding of why and how propaganda works— how it relates to our fears and hopes, our hates and loves, our mental and emotional conditioning, our basic needs. . . . As Secretary of the Institute for Propaganda Analysis, I can assure Mr. Smith that I have not heard of any students demanding authoritarianism as a means of dealing with propaganda, but I do know for a fact that the educational program has caused many thousands of teachers and students to have a surer faith in the present and ultimate values of the scientific method and democratic practices. (Miller, 1941, pp. 657–659)

Miller also defended the effectiveness of the Institute’s efforts to combat Fascism, racism, and class hatred. He shared many of Smith’s views about why propaganda is effective, but he remained convinced that propaganda could best be defeated by teaching students to understand how propaganda works—not by using democratic propaganda to oppose bad or undemocratic propaganda:

In the task of combating the unscientific theories of racism, which Hitler and Goebbels have utilized so effectively to create class hatreds, the Institute may be doing its best work. No student, once he has gone through the recommended educational program of the Institute, is likely to succumb to propaganda causing him to hate Jews as Jews and Negroes as Negroes. This approach does immunize students against propagandas inciting to hatred based on racial and religious differences. The process of scientific analysis in combination with a faith which holds fast to the values of democracy is the most powerful instrument for combating the wave of Ku Klux Klanism that is developing rapidly as a result of war tensions. (Miller, 1941, p. 664)

Who won this debate? Did Miller manage to persuade other elites that education was the best strategy for dealing with propaganda, or did Smith’s views win out? About the time that Miller’s article appeared, the Institute for Propaganda Analysis published a newsletter entitled “We Say Au Revoir.” It announced that it had been persuaded that for the good of the war effort, it should cease all activities. You will read much about these “democratic propaganda” campaigns such as the Why We Fight films in later chapters. And even when World War II ended and other wars—the Korean and the Cold—began, the Institute for Propaganda Analysis never reopened, and John Dewey’s calls for education were similarly marginalized. The task of defending democracy was handed over to Lasswell and his colleagues. The “science of democracy” ushered in an era of propaganda-for-good, or democratic propaganda. 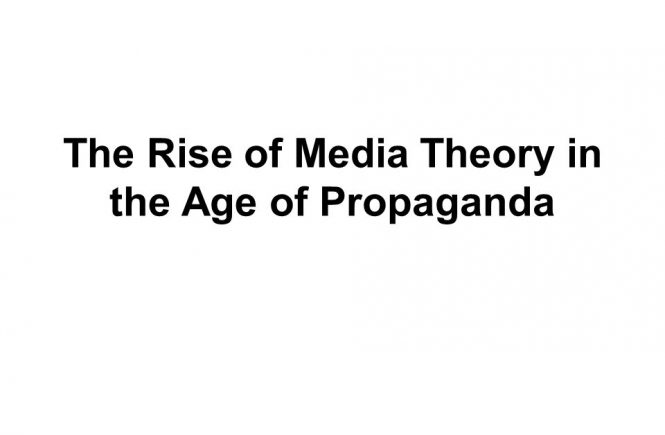