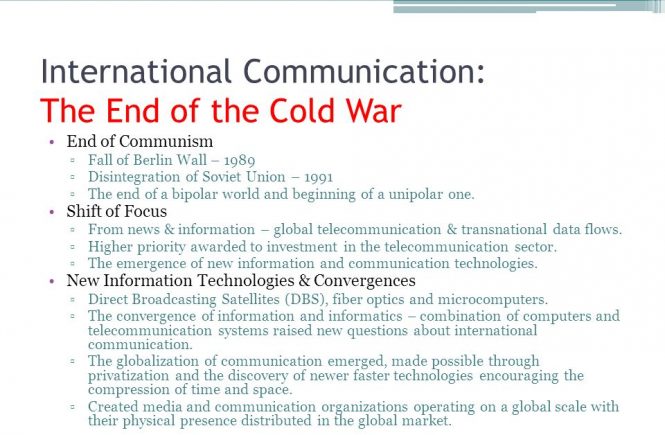 If the East-West ideological battle characterized the Cold War years of international communication, the fall of the Berlin Wall in 1989 and the breakup of the Soviet Union two years later, transformed the landscape of international politics, profoundly influencing global information and communication.
Television played an important role during the 1989 revolutions in Eastern Europe. (Ash, 1990), helping to bring the East-West ideological division of Europe to a close. The transition to capitalism was largely peaceful, except in Romania, where at least some of the violence was simulated. The 1989 Timisoara massacre in Romania was ostensibly staged for the world’s TV cameras, in what the French sociologist Jean Baudrillard called, ‘a hijacking of fantasies, affects and the credulity of hundreds of millions of people by means of television’ (1994: 69).
The August 1991 coup in Moscow, which led to the break-up of the Soviet Union, was called ‘the first true media event in the history of the Soviet Union’. The crisis had been ‘profoundly and decisively shaped by the electronic eye that transformed instantly and continuously, elements of a political confrontation into meaningful scripts with their corresponding images, styles, and symbols’ (Bonnell and Freidin, 1995: 44).
Since the break-up of the Soviet Union, the media in the eastern bloc countries have gradually been converted to the market (Splichal, 1994; Mickiewicz, 1997).
The end of the Cold War, variously celebrated as the dawn of a ‘new world order’, as ‘end of history’ (Fukuyama, 1992) and even a ‘clash of civilizations’ (Huntington, 1993), profoundly changed the contours of international communication. The superpower rivalry had ended and the bipolar world, which had informed debates on international communication for half a century, suddenly had become unipolar, dominated by the remaining superpower, the United States.
Such Russian words as glasnost (openness) and perestroika (restructuring) entered the world’s media vocabulary, representing a fundamental change in Moscow’s thinking towards the entire gamut of international relations. The globalization of glasnost contributed to a greater openness in international communication, with Western journalists operating freely from behind the former iron curtain. The stridency of anti-Western rhetoric was also becoming muted in Moscow, while in the West, doubts were being raised about the relevance of Radio Free Europe and Radio Liberty (Elliot, 1988; Woll, 1989; Time, 1988).
This shift also affected debates on international information flows within UNESCO, which in the late 1980s, had lost its primacy as the key forum for discussing international communication issues. The focus of debate too had shifted from news and information flows to such areas as global telecommunication and transnational data flows. The Paris-based Organization for Economic Co-operation and Development (OECD), with its concern about transborder data flow and the International Telecommunication Union (ITU), through its Maitland Commission Report, and the IPDC, were becoming increasingly important international fora (Renaud, 1986). The Maitland Report, which symbolized the change in the traditional role of ITU from being a technical group to a more activist organization, gave higher priority to investment in telecommunication, especially telephones2 (Ellinghaus and Forrester, 1985).
Another key contributing factor was the availability of new information technologies such as direct broadcasting satellites (DBS), fibre optics and microcomputers. The growing convergence between information and informatics – the combination of computer and telecommunication systems, traditionally dealt with as separate entities – made it essential to re-examine international communication in the light of technological innovations.
As the public ownership of state assets model, represented in its extreme form in the Soviet system, was dismantled, privatization became the new mantra, with the opening up of new markets in Eastern Europe and the former Soviet Union adding urgency to the privatisation project. The globalization of communication was made possible with the innovation of new information and communication technologies, increasingly integrated into a privatized global communication infrastructure. The ‘time-space compression’ that new technologies encouraged made it possible for media and telecommunication corporations to operate in a global market, part of an international neo-liberal capitalist system. As discussed in Chapter 3, the privatization of international communication industries became a major development of the 1990s, accelerated by the liberalization of global trade, under the auspices of the General Agreement on Tariffs and Trade (GATT).
Note:
1. The countries of Asia, Africa and Latin America were also the ‘non-industrialized’, ‘underdeveloped’ or ‘developing countries’. The term ‘the South’ gained currency in the 1980s after the Brandt Commission report which defined ‘the South’ thus: ‘in general terms, and although neither is a uniform or permanent grouping, “North” and “South” are broadly synonymous with “rich” and “poor,” “developed” and “developing”.’ (Brandt Commission Report, 1981, p. 31). This division was later reinforced by the South Commission, adding, ‘while countries of the North are, by and large, in control of their destinies, those of the South are very vulnerable to external factors and lacking in functioning sovereignty’ (South Commission, 1990:1).
2. The Independent Commission for World-wide Telecommunication Development, the 17-member commission headed by Sir Donald Maitland of the UK, was established in 1983 by the ITU to recommend ways to stimulate the expansion of global telecommunications. It submitted its report in 1985 (ITU, 1985).