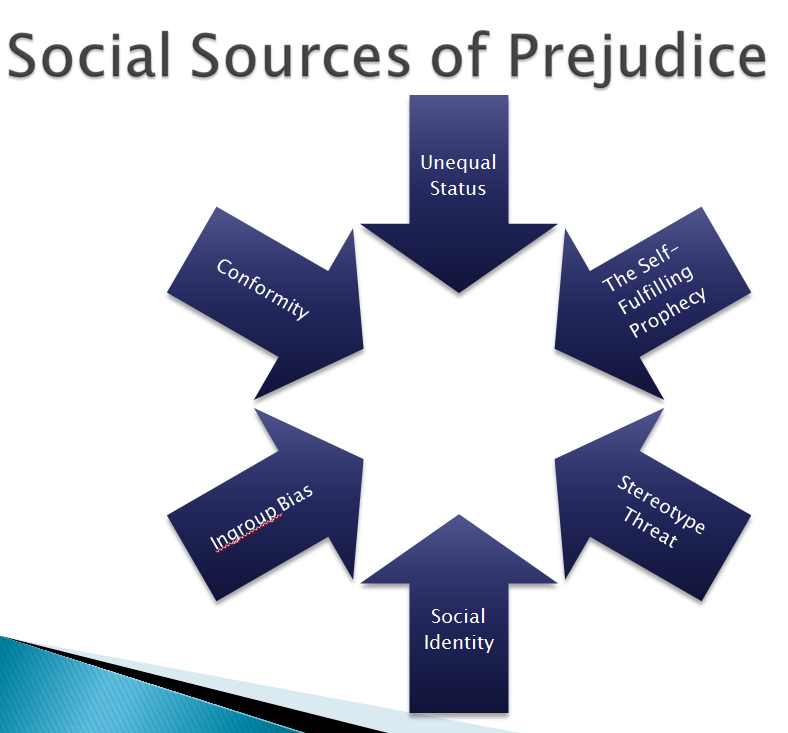 What is prejudice? Elaborate social sources of prejudice with examples from Pakistani Society.

Prejudice can be based upon a number of factors including sex, race, age, sexual orientations, nationality, socioeconomic status and religion. Some of the most well-known types of prejudice include:

According to psychologist Gordon Allport, prejudice and stereo types emerge in part as a result of normal human thinking. In order to make sense of the world around us, it is important to sort information into mental categories. “The human mind must think with the aid of categories,” Allport explained. “Once formed, categories are the basis for normal prejudgment. We cannot possibly avoid this process. Orderly living depends upon it. ” This process of categorization applies to the social world as well, as we sort people into mental groups based on factors such as age, sex and race.

“In this booklet, the men and women are actually of equal height. We have taken care to match the heights of the men and women pictured. That is, for every woman of a particular height, somewhere in the booklet there is also a man of that same height. Therefore, in order to make as accurate a height judgment as possible, try to judge each photograph as an individual case; do not rely on the person’s sex.”

In addition to these instructions, a $50 cash prize was offered to whoever made the most accurate judgments of height. Despite this, participants consistently rated the men as being a few inches taller than the women. Because of their prejudgment that men are taller than women, the participants were unable to dismiss their existing categorical beliefs about men and women in order to judge the heights accurately.

Researchers have also found that people tend to view members of outside groups as being more homogenous than members of their own group, a phenomenon referred to as the out-group homogeneity bias. This perception that all member of an out-group are alike holds true of all groups, whether based on race, nationality, religion, age or other naturally occurring group affiliation.

}  Once these inequalities exist, prejudice helps justify the economic and social superiority of those who have wealth and power

}  People view enemies as subhuman and depersonalize them with labels

}  If a person thinks we are clever or stupid or whatever, they will treat us that way.

}  If we are treated as if we are clever, stupid or whatever, we will act, and even become, this way.

}  The person has thus had their prophecy about us fulfilled!

}  This is also known as the Pygmalion Effect.

}  refers to being at risk of confirming, as self-characteristic, a negative stereotype about one’s group (Steele & Aronson, 1995)

}  Black college freshmen and sophomores performed more poorly on standardized tests than White students when their race was emphasized.

}  When race was not emphasized, however, Black students performed better and equivalently with White students.

}  The results showed that performance in academic contexts can be harmed by the awareness that one’s behavior might be viewed through the lens of racial stereotypes.

◦      A person may identify his self a man, a Filipino, a psychology student of USJ-R, a member of the school’s student council, a chess player, and so on..

}  The circle that includes “us” (the ingroup) excludes “them” (the outgroup)

}  Thus, a mere experience of being formed into groups may promote ingroup bias.

}  Due to human quest for a positive self-concept

}  If prejudice is socially accepted, many people will follow the path of least resistance and conform to fashion

}  Pain and frustration (a blocking of a goal) often evoke hostility.

}  When the cause of our frustration is intimidating or unknown, we often redirect our hostility (displaced aggression)

}  One way we simplify our environment is to categorize—to organize the world by clustering objects into groups (Macrae & Bodenhausen, 2000)

}  We define people by their most distinctive traits and behaviors

}  In explaining others’ actions, we frequently commit the fundamental attribution error.

}  We attribute people’s behavior so much to their inner dispositions that we discount important situational forces.

}  The error occurs partly because our attention focuses on the persons, and not the situation.

}  Essentially, the fundamental attribution error involves placing a heavy emphasis on internal personality characteristics to explain someone’s behavior in a given situation, rather than thinking about external situational factors.

}  Imagine yourself walking down a crowded sidewalk, carrying loaded bags from shops. If someone bumps into you, you are probably inclined to think “what an idiot! That person has no respect for others, he clearly saw me!” In this assessment of the person’s behavior, you fail to consider situational factors like someone else bumping into that person, or your failure to realize that your bags are taking up more room than you think they are, thus forcing people to bump into you as they try to get around you.

}  On a specific day a waitress is talking rude to her customers. The customers now think that she is a really bad person. What the customers don’t realize is that usually most people find the waitress friendly but today the waitress is experiencing one of the hardest days in her life. Her husband just left her for another woman, and she just lost her son in a car wreck. If the customers were aware of the problems the waitress just had, they actually wouldn’t mind her negative attitude as much considering her current state.

Increase Altruism and Different Measures to Help Others